In 1888, the city of Anderson caught the spirit of a booming industry that was sweeping through the South; textiles. Fields of cotton were now associated with whirling machinery and busy communities. J.L Orr founded Orr Mill, and shortly after, streets were being named, land was being purchased, and plans were being made. The most obvious addition, however, was the number of homes being built. A slice of this thriving industry now existed in the community, and thus, "mill life" had arrived.
​ 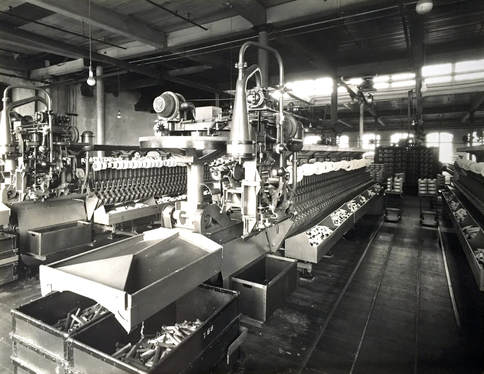 Orr Mill, Anderson SC
Mill workers and their families began meeting for worship in a newly erected schoolhouse in the "Orrville community". These early families were grounded in the Baptist faith, and in the summer of 1900, Orrville Baptist Church was organized. ​Through the leadership of Miss Anna Burger of the Home Mission Board of the Southern Baptist Convention, and with the help of Mr. Mike McGee (Saluda Baptist Association) and Dr. J.D. Chapman (Pastor, First Baptist Church), Orrville Baptist Church was officially founded. A building committee was formed and the church structure was built on land deeded by the Orr family. Orrville Baptist Church held her dedication service in January of 1901 at the newly constructed building located at 42 Hammett Street, and Rev. W.B. Hawkins was elected as the first pastor. 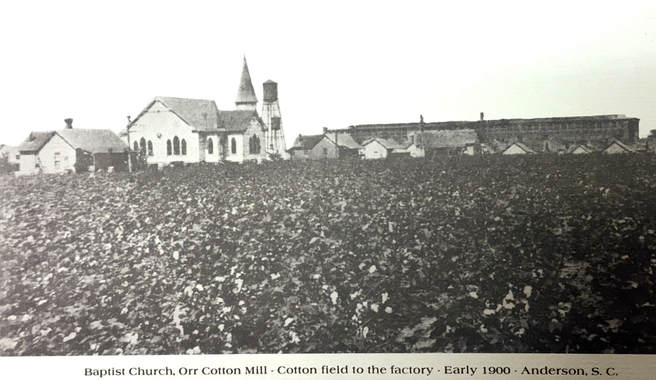 During the early years of her existence, Orrville Baptist Church held worship services on the first and third Sunday of each month. Baptisms were held in the flowing creek of a nearby pasture. Attendance and membership grew parallel with the textile industry. By 1925, the church had 287 members; a strong number for a 25 year old mill community church. Blessed with dedicated servants, and a commitment to personal discipleship and teaching, Orrville quickly became a beacon of the Gospel in Anderson.
1937 was a special year for Orrville Baptist Church. Dr. C.V. Martin accepted Orrville's call to begin a second term as Pastor. It was also the inaugural year of Vacation Bible School for the church, which began at 9:00 AM and ended at 5:00 PM. Mrs. Frances Kitching worked tirelessly as principal of Vacation Bible School, and 427 students attended the second year of its' existence. As the church continued to grow, so did her needs. Ten years later, an Educational Building was built behind the sanctuary, with even more expansion added in 1950. In 1967, a Fellowship Hall named after Johnnie Hayes (charter member) was constructed.

Tragedy struck the church in 1970, however, when Orrville's beloved Pastor was killed in an automobile accident. A truck attempted to pass another vehicle, and struck Martin's automobile head-on. A historic union between a pastor and God's people had come to a close. For the first time in over 30 years, Orrville would be looking for another Pastor. On May 3 of 1970, Dr. Eddie Greene would answer the call to become the next Pastor of Orrville Baptist Church. Nine years later, a Christian Activity Center was constructed and additional parking lots were added to the property. In 1981, Eddie Greene resigned to become Pastor of Washington Avenue Baptist Church in Greenville, South Carolina.

On February 25th, 2018, the church held a special presentation titled 'The State of the Church'. It was a day marked with tears, hope, conviction, and anticipation. It also marked the starting point for revitalization at Orrville Baptist Church.

​     The church was encouraged to begin discerning, praying, and following the Spirit's guidance for Orrville's next steps. Former Interim Pastor, Mike King concluded the day with prayer, as the church gathered around the deacons (Dale Johnson, Mark Garrison, Jimmy Brown, Chris Vassar, Sam Garrison, Charlie Hatcher) of the church.

"Father, we repent..." - Former Interim Pastor, Mike King
For over 5 months, the Deacons met tirelessly to discern the Spirit's guidance in revitalizing Orrville Baptist Church. On July 8th, 2018, the church was presented with a model called CAPTIVE that concentrated on embracing Spiritual Gifts in the lives of every member. The church was presented with a new vision that encourages each individual member to work together to make disciples both near and far. A week later, on July 15th, Orrville Baptist Church voted to accept the revitalization proposal and committed herself to God's mission for the church.

​We invite you to come be a part of God's story at Orrville Baptist Church.

​"Help us, O God of our salvation, for the glory of Your name;
And deliver us and forgive our sins for Your name’s sake". - Psalm 79:9 (NASB)